Believe it or not, there really are a lot of rules and techniques for riding a bike.  You don’t just hop on and coast down the neighborhood street, like you did as a kid!  Typically you must not only follow all the same traffic rules that a car would, but you also have a lot to do with shifting gears and skinny tires and all! 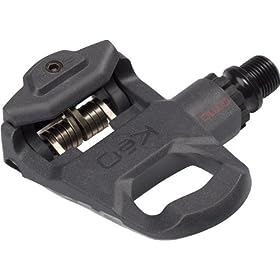 The first thing you’ll need to get the hang of is clipping in and out of your cleats.  (“clipless pedals”, as they are called – in reference to the old-school pedals that had clips that held your shoes on tight)  They seem intimidating at first, but don’t panic.  A simple twist of the foot – kicking your heel out a bit – will release your foot.  You can do this at almost zero miles per hour if you don’t freak out!  Practice it a few times until you get comfortable.  And always remember you’re clipped in when you come to a stop!  (Many panicked new cyclists tip over because they forget to clip out!)  …Clipping in can be a challenge as well.  Most pedal styles (Look, Shimano, etc.) are “one-sided”, which means you can only clip in on one side.  Some (Speedplay and most mountain bike pedals) are “two-sided”, which means you can clip in on either side.  While the two-sided ideas seems easier, the one-sided variants are actually quite easy if you know the techniques.  Basically, they’re weighted such that the back of the pedal always hangs down.  So, to clip in, you simply push the front of the pedal forward, which will rotate the whole thing in line with your shoe.  Ideally you “catch” the cleat of your shoe on the pedal, and then you simply press down until you hear the solid “click”.  Getting the first one in when you’re stopped is easy.  (I clip my left foot in because I’m left-handed and left-footed, I suppose!)  The second one is a bit of a challenge, however.  You typically have to look down for a second to get things lined up.  Then drag your shoe across the front of the pedal until the cleat on your shoe catches, then press down until it “clicks” and your done!  Sometimes it takes a couple tries, so don’t feel embarrassed if you don’t get it the first (or the second) time at an intersection.  Just be very careful – you can ride the pedal without being completely “clicked” in until you get to a safe spot on the other side of the intersection if necessary!

One thought on “How to ride – rules and techniques”