When I first got into riding it was purely as a social activity with friends.  We’d go for a ride in the morning, and generally get some breakfast afterwards.  It seemed like a fun thing to do, and I was getting a little exercise to boot.

But the more we rode, the more I noticed that I wasn’t keeping up.  Nor were my friends waiting for me!  …At first I was insulted by this, but eventually I realized that one aspect of cycling is that everyone rides at his or her own pace.  Yes, you can, of course, slow down, but it generally means sacrificing your comfort zone and/or your training regimine.

So, eventually the rides consisted of my friends going ahead at their quicker pace and me catching up eventually.  They were nice enough to wait for me periodically, to make sure I was still going okay.  (Which, I’ve later determined, is the tradition of cycling.  You “regroup” at certain points along the route to let the slower riders like me catch up to the group.)  So, I wasn’t insulted anymore, but riding suddenly wasn’t as social as it had previously been. 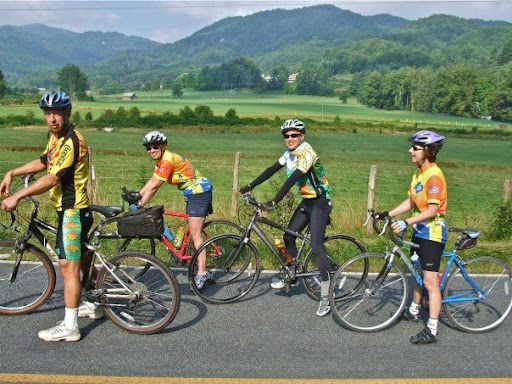 My solution was to train harder so that I could keep up with them.  (I’m still working on it, but that’s a whole other discussion.)  But the question remains – is the traditional “regroup later” approach okay, or should riders try to stick together more?  (I can see both sides of this argument – I’d love to hear your opinion…)